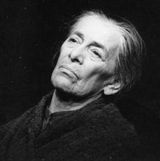 The daughter of a Jewish lawyer, she became a Communist Party member from 1930 and Artistic Director of the Berliner Ensemble after her husband Brecht's death in 1956. Among the Brecht roles she is most noted for creating: Pelagea Vlassova, The Mother of 1932, Antigone in Brecht's version of the Greek tragedy, the title role in his civil war play Señora Carrar's Rifles and, most famously, the iconic Mother Courage.

Between 1933 and 1947, as a refugee from Hitler's Germany, she was seldom able to pursue her acting craft - even during the family's six-year stint in Los Angeles. It was only with the foundation of the Berliner Ensemble in the German Democratic Republic in 1949 that the brilliance of Brecht's theatre began to be recognised worldwide. She died in 1971, still at the helm of the company, and many of the roles that she created with Brecht are still in the theatre's repertoire today.