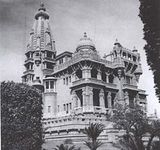 The Baron Empain, a well known amateur egyptologist and prominent European entrepreneur, arrived in Egypt in January 1904, intending to rescue one of his Belgian company's projects in Egypt; the construction of a railway line linking Al-Matariyyah to Port Said. Despite losing the railway contract to the British, Empain stayed on in Egypt.

In 1905, Empain established the Cairo Electric Railways and Heliopolis Oases Company, which bought a large stretch of desert some distance to the northeast of Cairo at a low price from the colonial government. His efforts culminated in 1907 with the building of the new town of Heliopolis, in the desert ten kilometers from the center of Cairo. The new city represented the first large scale attempt to promote its own architectural style, known now as the Heliopolis style. It was designed as a "city of luxury and leisure", with broad avenues and equipped with all necessary conveniences and infrastructure; water, drains, electricity, hotel facilities,...
Read More