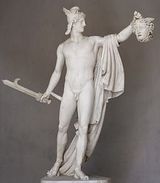 Description:
Hellenism, as a neoclassical movement distinct from other Roman or Greco-Roman forms of neoclassicism emerging after the European Renaissance, is most often associated with Germany and England in the eighteenth and nineteenth centuries. In Germany, the preeminent figure in the movement was Johann Joachim Winckelmann, the art historian and aesthetic theoretician who first articulated what would come to be the orthodoxies of the Greek ideal in sculpture (though he only examined Roman copies of Greek statues, and was murdered before setting foot in Greece). For Winckelmann, the essence of Greek art was noble simplicity and sedate grandeur, often encapsulated in sculptures representing moments of intense emotion or tribulation. Other major figures include Hegel, Schlegel, Schelling and Schiller.

In art and architecture, the...
Read More