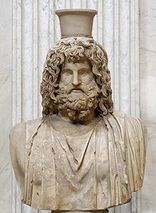 Description:
Hellenistic religion is any of the various systems of beliefs and practices of the people who lived under the influence of ancient Greek culture during the Hellenistic period and the Roman Empire (c. 300 BCE to 300 CE). There was much continuity in Hellenistic religion: the Greek gods continued to be worshiped, and the same rites were practiced as before. Change came from the addition of new religions from other countries, such as including the Egypt god(esse)s of Isis and Serapis, and the Syria gods of Atargatis and of Hadad, which provided a new outlet for people seeking fulfillment in both the present life and the afterlife. The worship of Hellenistic rulers was also a feature of this period, most notably in Egypt, where the Ptolemies adopted earlier pharaonic practice, and established themselves as god-kings. Elsewhere rulers might receive divine status without the full status of a god.

Magic was practiced widely, and these too, were a continuation from earlier times. Throughout the Hellenistic world, people would consult oracles, and use charms and figurines to deter misfortune or to cast spells. Also developed in this era was the complex system of astrology, which sought to determine a person's character and future in the movements of the sun, moon, and planets. The systems of Hellenistic philosophy, such as Stoicism and Epicureanism, offered an alternative to traditional religion, even if their impact was largely limited to the educated elite.