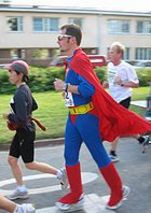 Description:
The Helsinki City Marathon is an annual marathon held in Helsinki, Finland. It was established in 1980 and is normally held in August. The marathon is run "In the settings of Baltic sea and open parks", and is considered to be one of the most beautiful marathons in the world by some.

The course starts near the statue of Paavo Nurmi and finishes at the Olympic Stadium. Various parks, miles of Baltic Sea coastline, and the Helsinki City centre are all located along the route.