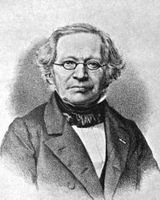 Not to be confused with Heinrich Hertz, a German physicist

In 1817 he was sent to the university. His father died in his infancy, and the family property was destroyed in the bombardment of 1807. The boy was brought up by his relative, ML Nathanson, a well-known newspaper editor.

Young Hertz passed his examination in law in 1825. But his taste was all for polite literature, and in 1826-1827 two plays of his were produced, Mr Burchardt and his Family and Love and Policy; in 1828 followed the comedy of Flyttedagen. In 1830 he brought out what was a complete novelty in Danish literature, a comedy in rhymed verse, Amor's Strokes of Genius.

In the same year Hertz published anonymously Gengangerbrevene, or Letters from a Ghost, which he pretended were written by Baggesen, who had died in 1826. The book was written in defence of Johan Ludvig Heiberg, and was full of satirical humour and fine critical insight. Its success was overwhelming; but Hertz preserved his anonymity, and the secret was not known until many years later.

In 1832 he published a didactic poem, Nature and Art, and Four Poetical Epistles. A Day on the Island of Als was his next comedy, followed in 1835 by The Only Fault. Hertz passed through Germany and Switzerland into Italy in 1833; he spent the winter there, and returned the following autumn through France to Denmark.In 1836 his comedy of The Savings Bank...
Read More