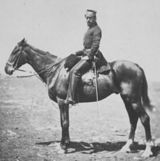 Description:
Major General Sir Henry Hugh Clifford VC KCMG CB (12 September 1826 – 12 April 1883) was an English recipient of the Victoria Cross, the highest and most prestigious award for gallantry in the face of the enemy that can be awarded to British and Commonwealth forces.

Clifford was the third son of Hugh Charles Clifford, 7th Baron Clifford, who died in 1858, by his marriage with Mary Lucy, only daughter of Thomas Weld of Lulworth Castle, Dorsetshire. He was born on 12 September 1826 and received his first commission as a second lieutenant in The Rifle Brigade on 7 August 1846.

He served in South Africa against the Gaikas under Sandili in the following year, and then against the Boers, until their submission at Weinberg on the Vaal river. On the outbreak of another Kaffir war in 1852 he again went to Africa, where he remained until November 1853.

He took part in the Crimean war, where he received the appointment of aide-de-camp to Sir George Brown, commanding the light division, and was present at Alma and Inkerman, and for his gallantry in the latter battle was decorated with the Victoria cross, by leading one of the charges, killing one of the enemy with his sword, disabling another and saving the life of a soldier (5 November 1854).

In May 1855 he was appointed deputy assistant quartermaster-general, and remaining in the Crimea until the conclusion of the war was then promoted to the rank of brevet major, and received the medal and clasps for...
Read More