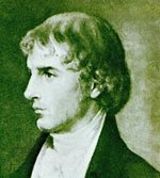 Description:
Henry Joy McCracken (31 August 1767 &ndash; 17 July 1798) was a cotton manufacturer and industrialist, Presbyterian, Irishman, and a founding member, along with Theobald Wolfe Tone, James Napper Tandy, and Robert Emmet, of the Society of the United Irishmen.

Henry Joy McCracken was born and raised in Belfast, the brother of social reformer, Mary Ann McCracken with whom he shared an interest in Irish traditional culture. In 1792 he helped organise the Belfast Harp Festival which gathered aged harpist from around Ireland, and helped preserve the Irsh airs by having them transcribed by Edward Bunting. Bunting who resided in his house, was a classical trained musician. Henry became interested in radical politics from an early age and joined the Society of the United Irishmen in 1795 which quickly made him a target of the authorities. He regularly travelled throughout the country using his business as a cover for organising other United Irish societies but was arrested in October 1796 and lodged in Kilmainham jail in Dublin. While imprisoned with other United Irish leaders, McCracken fell seriously ill and was released on bail in December 1797.

Following the outbreak of the United Irish rebellion in Leinster in May 1798, the Antrim organisation met on June 3rd to decide on their response. The meeting ended inconclusively with a vote to wait for French aid being passed by a narrow margin. A new meeting of delegates was held in Templepatrick on June 5th where McCracken was...
Read More