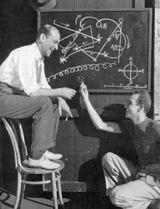 Pan was born Hermes Panagiotopoulos in 1910 in Nashville, Tennessee, of Greek and Irish extraction. His father was from Aigio in Peloponnese where his family had opened the first theatre. He was sent to Memphis, Tennessee as the Greek consul never to return to Greece. Following the death of Pan's father, his uncle Alkus held Pan, his sister and mother at gun point and burned all their shares and money on the grounds that if he could not have them, no one would.Hermes and his sister Vasso were eventually raised Catholic by his mother, the former Mary Huston. Penniless, they moved to the poorest area of New York where Hermes learned his first tap dancing steps on the streets from local black children. At their lowest ebb, the family had only some potatoes and coffee for their meal. Since that day they vowed to commemorate it and every year, on the same day (June 13th), wrote what they did and ate that day in a journal... this day eventually became a family celebration.Eventually, he headed with his mother and sister (and "Sammy", a black boy they met at a gas station) West to Los Angeles, California. His career began with an appearance as a chorus boy in 1928 in the......
Read More