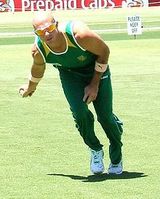 Gibbs was schooled at St Joseph's Marist College and then Diocesan College in Rondebosch. Gibbs was a gifted sportman at school playing provincial rugby, cricket and soccer and featuring in SA Schools teams for all three sports.

At backward point, he is considered by some to be the next Jonty Rhodes in his ability to hit the stumps, with a report prepared by Cricinfo in late 2005 showing that since the 1999 Cricket World Cup, he had effected the eighth highest number of run-outs in ODI cricket of any fieldsman, with the tenth highest success rate. Gibbs is said to rarely practice in the nets before a match. It is said he prefers to play on instinct in this case.

He became the first player to hit six sixes in one over in One Day International cricket, doing so against the Netherlands in the 2007 Cricket World Cup. On 8 June 2007 he got married in St Kitts to Tenielle Povey, but divorced soon afterwards.

Gibbs has scored two double centuries in his Test career, both contrasting innings. His first was an innings of 211 not out against New Zealand at Jade Stadium in 1999. His innings took 468 balls while his second double century, 228 against Pakistan came off just 240 balls. In that innings in Newlands, he reached a national record partnership of 368 with Graeme Smith. He has put on a further...
Read More