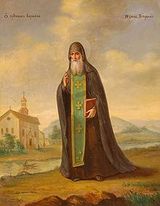 Description:
Hieromonk (Greek: Ἱερομόναχος, Ieromonachos; Slavonic: Ieromonakh, ), also called a Priestmonk, is a monk who is also a priest in the Orthodox Church and Eastern Catholicism.

A hieromonk can be either a monk who has been ordained to the priesthood, or a priest who has received monastic tonsure. In the Orthodox Church, a man must be either married or have been tonsured a monk before he is eligible for ordination; however, when a married priest's wife dies it is not uncommon for him to become a monk, since the Church forbids clergy to enter into a second marriage after ordination.

Ordination to the priesthood is the exception rather than the rule for monastics, as a monastery will usually only have as many hieromonks and hierodeacons as it needs to perform the daily services.

In some countries, married clergy are referred to as "white clergy" while monastic clergy are called "black clergy" because monks should always wear black clothing but married clergy in many parts of the world typically wear white (or gray, blue or some other color) cassocks and rasons.

The proper title for a Hieromonk is, "the Reverend Hieromonk...... ...
Read More