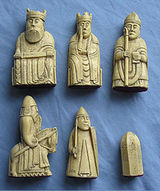 The history of chess spans some 1500 years. The earliest predecessors of the game originated in India, before the 6th century AD. From India, the game spread to Persia. When the Arabs conquered Persia, chess was taken up by the Muslim world and subsequently spread to Southern Europe. In Europe, chess evolved into its current form in the 15th century. In the second half of the 19th century, modern chess tournament play began, and the first world Chess Championship was held in 1886. The 20th century saw great leaps forward in chess theory and the establishment of the World Chess Federation (FIDE). Developments in the 21st century include use of computers for analysis, which originated in the 1970s with the first programmed chess games on the market. Online gaming appeared in the mid 1990's.

The precursors of chess probably originated in India during the Gupta empire, where its early form in the 6th century was known as chaturaṅga, which translates as "four divisions (of the military)": infantry, cavalry, elephantry, and chariotry, represented by the pieces that would evolve into the modern pawn, knight, bishop, and rook, respectively.Davidson, Hooper & Whyld, and Golombek...
Read More