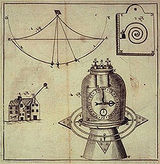 Description:
The history of longitude is a record of the effort, by navigators and scientists over several centuries, to discover a means of determining longitude.

The measurement of longitude is important to both cartography and navigation. Historically, the most important practical application of these was to provide safe ocean navigation. Knowledge of both latitude and longitude was required. Finding a method of determining longitude took centuries and involved some of the greatest scientific minds.

Eratosthenes in the 3rd century BC first proposed a system of latitude and longitude for a map of the world. By the 2nd century BC Hipparchus was the first to use such a system to uniquely specify places on the earth. He also proposed a system of determining longitude by comparing the local time of a place with an absolute time. This is the first recognition that longitude can be determined by accurate knowledge of time. In the 11th century Al-Biruni believed the earth rotated on its axis and this forms our modern notion of how time and longitude are related.

Determining longitude on land was fairly easy compared to the task at sea. A stable surface to work from, a comfortable location to live in while performing the work and the ability to repeat determinations over time made for great accuracy. Whatever could be discovered from solving the problem at sea would only improve the...
Read More