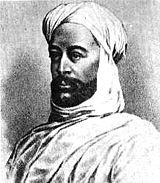 Description:
Developments in Sudan during the late 19th century cannot be understood without reference to the British position in Egypt. In 1869, the Suez Canal opened and quickly became Britain's economic lifeline to India and the Far East. To defend this waterway, Britain sought a greater role in Egyptian affairs. In 1873, the British government therefore supported a programme whereby an Anglo-French debt commission assumed responsibility for managing Egypt's fiscal affairs. This commission eventually forced khedive Ismail to abdicate in favor of his more politically acceptable son, Tawfiq (1877–1892).

After the removal in 1877 of Ismail, who had appointed him to the post, Charles George Gordon resigned as governor general of Sudan in 1880. His successors lacked direction from Cairo and feared the political turmoil that had engulfed Egypt. As a result, they failed to continue the policies Gordon had put in place. The illegal slave trade revived, although not enough to satisfy the merchants whom Gordon had put out of business. The Sudanese army suffered from a lack of resources, and unemployed soldiers from disbanded units troubled garrison towns. Tax collectors arbitrarily increased taxation.

In this troubled atmosphere, Muhammad Ahmad ibn as Sayyid Abd Allah, a fakir, or holy man, who combined personal magnetism with religious zealotry, emerged, determined to expel the Turks and restore Islam to its primitive purity. The son of a Dunqulah boatbuilder, Muhammad Ahmad...
Read More