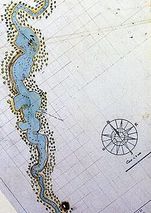 This article details the 'History of Perth from the first human activity in the region to the 20th century. The article covers aspects of all of the Perth metropolitan area, including the modern CBD.

The city of Perth in Western Australia was named by Captain James Stirling in 1829 after Perth, Scotland, in honor of the birthplace and parliamentary seat in the British House of Commons of Sir George Murray, Secretary of State for War and the Colonies.

The first inhabitants of Australia arrived from the north approximately 40,000 to 60,000 years ago and eventually spread across the whole landmass. These Indigenous Australians were well established in the area around Perth by the time European ships started accidentally arriving en-route to Batavia (now Jakarta) in the early seventeenth century.

Before the establishment of the Swan River Colony, the indigenous Noongar people occupied the southwest corner of Western Australia, hunting and gathering. The lakes on the coastal plain were particularly important to the Aboriginal people, providing them with both spiritual and physical sustenance.

The area in which Perth now stands was called Boorloo. Boorloo formed part of Mooro, the tribal lands of Yellagonga, whose group was one of several based around the Swan River, known collectively as the Whadjug. The Whadjug was a part of the greater group of 13 or so dialect groupings which formed the south west socio-linguistic block still known today as Noongar...
Read More