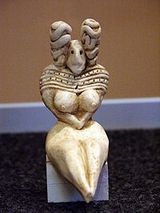 Description:
The roots of Shaktism – a Hindu denomination that focuses worship upon Shakti or Devi, the Hindu Divine Mother – penetrate deeply into India's prehistory. From the Devi's earliest known appearance in Indian Paleolithic settlements more than 20,000 years ago, through the refinement of her cult in the Indus Valley Civilization, her partial eclipse during the Vedic period, and her subsequent resurfacing and expansion in Sanskrit tradition, it has been suggested that, in many ways, "the history of the Hindu tradition can be seen as a reemergence of the feminine."

Shaktism as it exists today began with the literature of the Vedic Age, further evolved during the formative period of the Hindu epics, reached its full flower during the Gupta Age (300-700 CE), and continued to expand and develop thereafter. The most important text in Shaktism is the Devi Mahatmya, composed some 1,600 years ago. Here, for the first time, "the various mythic, cultic and theological elements relating to diverse female divinities were brought together in what has been called the 'crystallization of the Goddess tradition.'"Brown(a), p. ix. Other important texts include the Lalita Sahasranama, the Devi...
Read More