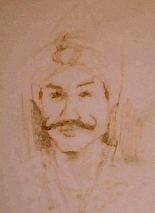 Description:
The history of Singapore dates to the 11th century. The island rose in importance during the 14th century under the rule of Srivijayan prince Parameswara and became an important port until it was destroyed by Portuguese raiders in 1613. The modern history of Singapore began in 1819 when Englishman Sir Thomas Stamford Raffles established a British port on the island. Under British colonial rule, it grew in importance as a centre for both the India-China trade and the entrepôt trade in Southeast Asia, rapidly becoming a major port city.

During World War II, Singapore was conquered and occupied by the Japanese Empire from 1942 to 1945. When the war ended, Singapore reverted to British control, with increasing levels of self-government being granted, culminating in Singapore's merger with the Federation of Malaya to form Malaysia in 1963. However, social unrest and disputes between Singapore's ruling People's Action Party and Malaysia's Alliance Party resulted in Singapore's expulsion from Malaysia. Singapore became an independent republic on 9 August 1965.

Facing severe unemployment and a housing crisis, Singapore embarked on a modernisation programme that focused on establishing a manufacturing industry, developing large public housing estates and investing heavily on public education. Since independence, Singapore's economy has grown by an average of nine percent each year. By the 1990s, the country had become one of the world's most prosperous nations, with a......
Read More