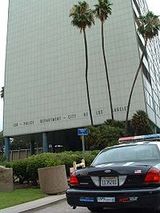 Description:
The history of the Los Angeles Police Department is long and complex.

California Gold Rush Los Angeles was known for its violence, gambling and "vice" and lack of effecive civil law enforcement. It was reputed to have the highest murder rate in the United States at the time and the countryside was infested with bandits. Most men went armed with pistols and knives and lynching was often the method used to dispose of lawbreakers, courts being few and ineffective. The first specific Los Angeles police force was founded in 1853 as the Los Angeles Rangers, a volunteer California State Militia company that assisted the existing County Sheriff in enforcing the law until disbanded in 1857. The Rangers were supplemented from 1853 by the Los Angeles Guards, a local volunteer California State Militia company that lasted until 1880 and by the Los Angeles City Guards (1855-1861).The first paid police force was created in 1869, when six officers were hired to serve under City Marshal William C. Warren. Warren was shot by one of his deputies, Joe Dye, in 1876 in a quarrel over a reward. To replace Warren, the newly created Board of Police Commissioners selected Jacob F. Gerkens. The latter was replaced within a year by saloon owner Emil Harris, the second of fifteen police chiefs from 1876 to 1889.

The first chief to remain in office for any time was John M. Glass; appointed in 1889, he...
Read More