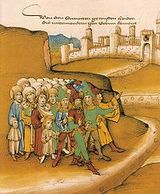 History Of The Romani People

History of the Romani people

Description:
The Romani people, also referred to as the Roma or Gypsies, are an ethnic group who live primarily in Europe. They are believed to have originated in the northern part of the Indian subcontinent. They began their migration to Europe and North Africa via the Iranian plateau about 1,000 years ago.

The reason for their diaspora remains unknown.

The absence of a written history has meant that the origin and early history of the Romani people was long an enigma. Indian (mixed) origin, was suggested on linguistic grounds as early as 200 years ago. One theory suggests that the name ultimately derives from a form ḍōmba- 'man of low caste living by singing and music', attested in Classical Sanskrit.Cf. Ralph L. Turner, A comparative dictionary of the Indo-Aryan languages, p. 314. London: Oxford University Press, 1962-6.

Linguistic evidence indicates the Romanies originated from the Rajasthani people, emigrating from India towards the northwest no earlier than the 11th century. Contemporary populations sometimes suggested as sharing a close relationship to the Romani are the Dom people of Central Asia and the Banjara of India.

Genetic evidence is connecting the Romani people and the Jat people, the descendants of groups which emigrated from India towards Central Asia during the medieval period. similarities shared with several populations...
Read More