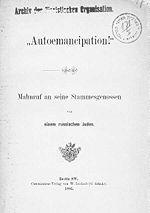 Description:
Zionism as an organized movement is generally considered to have been fathered by Theodor Herzl in 1897; however the history of Zionism began earlier and related to Judaism and Jewish history. The Hovevei Zion, or the Lovers of Zion, were responsible for the creation of 20 new Jewish settlements in Palestine between 1870 and 1897.

Since the creation of Israel, the importance of the Zionist movement as an organization has declined, as the Israeli state has grown stronger.