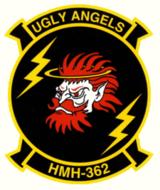 Support the Marine Air-Ground Task Force with assault support transport of combat troops, supplies, and heavy equipment, day or night, under all weather conditions, during expeditionary, joint or combined operations.

The Ugly Angels hold the proud distinction of having served as the first Marine aircraft unit in the Republic of Vietnam, going ashore on 15 April 1962 as Marine Helicopter Transport Squadron Light (HMM) 362 with their Sikorsky UH-34s, arriving at Soc Trang in the Mekong Delta south of Saigon.Dorr (2003), p.200. under the leadership of Lieutenant Colonel Archie Clapp. The task unit was called "Shufly" and its first operational employment involved lifting Vietnamese troops into battle on April 22. It was the evolution of "Archie’s Angels" to "Ugly Angels" that gave HMM/HMH 362 their well known call sign. HMM 362 served in the Republic of Vietnam until 1969, in...
Read More