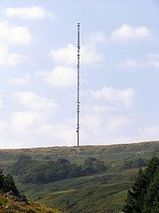 Description:
Holme Moss is a moor in the south Pennines of England, on the border between the High Peak District of Derbyshire and the West Yorkshire district of Kirklees. It is just inside the boundary of the Peak District National Park. The River Holme rises on the moor and flows through the village of Holme, about a mile below the moor, and the town of Holmfirth. The upper part of the moor continues into Black Hill which is crossed by the Pennine Way north-south footpath.

The Holmfirth Harriers Athletics Club organise an annual "Holme Moss Fell Race" on and around Holme Moss in the summer. In the winter Holme Moss frequently gets a covering of snow, while the surrounding valleys do not. The top car park is a popular spot for bringing children to do sledging, or even more serious snowsports. With heavier snowfall, the road is always the first in the area to be blocked. This is not helped by two local councils needing to cooperate to keep the road clear of snow, and sometimes one will clear its side of the hill, but the snowploughs turn around at the top, leaving the other side blocked.

To British cycling enthusiasts, Holme Moss has become synonymous with the A6024 (Woodhead Road) which crosses the moor, between the village of Holmbridge to the north and the Woodhead Reservoir to the south. The northern side in particular is one of England's most well-known bicycle ascents, and has acquired a reputation as among the...
Read More