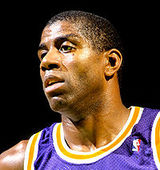 Description:
"Homer Defined" is the fifth episode of The Simpsons<nowiki>'</nowiki> third season. It originally aired on the Fox network in the United States on October 17, 1991. In the episode, Homer accidentally saves the Springfield Nuclear Power Plant from meltdown by choosing a button to a counting rhyme. He is honored as a hero and receives praise from his daughter Lisa, but he starts to feel unworthy because he knows that his so-called heroism was just luck. Meanwhile, Bart is downhearted after learning that Milhouse's mother has forbidden him to spend time with Bart anymore.

The episode was written by freelance writer Howard Gewirtz and directed by Mark Kirkland. Basketball player Magic Johnson of the Los Angeles Lakers made a guest appearance in the episode as himself, becoming the first professional athlete to do so on the show. He appears in two sequences, one of which sees him calling Homer to congratulate him on saving the plant. The second appearance comes later in the episode in a basketball game sequence that Lakers sportscaster Chick Hearn also guest stars in.

The episode has received generally positive reviews from critics, particularly Johnson's appearance. In its original airing on the Fox network, "Homer Defined" acquired a 12.7 Nielsen rating—the equivalent of being watched in approximately 11.69 million homes—and finished the week ranked 36th.