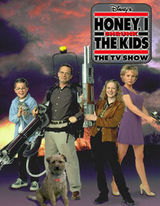 Honey, I Shrunk The Kids: The TV Show

Honey, I Shrunk the Kids: The TV Show

Peter Scolari took over the role as Wayne Szalinski, the wacky inventor in the original film, played by Rick Moranis. Each episode incorporates new technologies and digital effects to feature the family in various new adventures. The series was filmed in Calgary, Alberta, with its main studios located in Currie Barracks, a decommissioned Canadian Forces dormitory. Reruns of the series aired on Disney Channel from 2001 to 2004, and currently air on The Hub since its launch on October 10, 2010.

The Szalinski family are the only returning characters from the films. Wayne Szalinski (Peter Scolari), the show's protagonist, is the husband of Diane and the father of Amy and Nick. The well-meaning Wayne constructs a variety of inventions, including the Shrink-Ray, Neuron Nudger and Brainiactivator among others, that often create predictaments for his family. His wife, Diane Szalinski (Barbara Alyn Woods), is a lawyer. Diane supports Wayne and is very loving, but gets fed up with his antics. The...
Read More