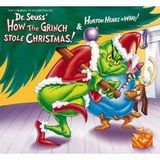 Description:
How the Grinch Stole Christmas! is a 1966 American animated television special directed by Chuck Jones. It is based on the homonymous children's book by Dr. Seuss, the story of The Grinch trying to take away Christmas from the townsfolk of Whoville below his mountain hideaway. The special, which is considered a short film as it runs less than an hour, is one of the very few Christmas specials from the 1960s to still be shown regularly on television. Jones and Giesel previously worked together on the Private Snafu training cartoons during World War 2.

The 26-minute short was originally telecast on CBS on December 18, 1966. CBS repeated it annually during the Christmas season until 1987. It was eventually acquired by Turner Broadcasting System, which now shows it several times between November and January. It has since been broadcast on TBS, TNT, Cartoon Network, and The WB Television Network. Most recently, it has been shown on ABC and ABC Family, but with some scenes trimmed down because of time constraints (the show was made at a time when commercial breaks on television were shorter than they are now). In any event, as of the present time, it is the lead-off "classic" special (i.e. the first classic special) that airs on network television each Christmas season.