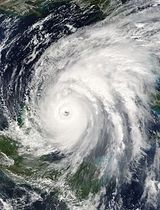 Description:
Hurricane Wilma was the most intense tropical cyclone ever recorded in the Atlantic basin. Wilma was the twenty-second storm (including the subtropical storm discovered in reanalysis), thirteenth hurricane, sixth major hurricane, and fourth Category 5 hurricane of the record-breaking 2005 season. A tropical depression formed in the Caribbean Sea near Jamaica on October 15, and intensified into a tropical storm two days later, which was named Wilma. After heading westward as a tropical depression, Wilma turned abruptly southward after becoming a tropical storm. Wilma continued intensifying, and eventually became a hurricane on October 18. Shortly thereafter, extreme intensification occurred, and in only 24 hours, Wilma became a Category 5 hurricane with winds of 185&nbsp;mph (295&nbsp;km/h).

Intensity slowly leveled off after becoming a Category 5 hurricane, and winds had decreased to 150&nbsp;mph (240&nbsp;km/h) before reaching the Yucatán Peninsula on October 20 and October 21. After crossing the Yucatán Peninsula, Wilma emerged into the Gulf of Mexico as a Category 2 hurricane. As Wilma began accelerating to the northeast, gradual re-intensification occurred, and the hurricane became a Category 3 hurricane on October 24. Shortly thereafter, Wilma made landfall in Cape Romano, Florida with winds of 120&nbsp;mph (190&nbsp;km/h). As Wilma was crossing Florida, it had briefly weakened back to a Category 2 hurricane, but again re-intensified as it...
Read More