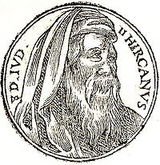 Description:
Hyrcanus II, a member of the Hasmonean dynasty, was the Jewish High Priest and King of Judea in the 1st century BC.

Hyrcanus was the eldest son of Alexander Jannaeus, King and High Priest, and Alexandra Salome. After the death of Alexander in 76 BC, his widow succeeded to the rule of Judea and installed her elder son Hyrcanus as High Priest.

When Salome died in 67 BC, she named Hyrcanus as successor to the Kingship as well. Hyrcanus was already High Priest but also shared his mother's religious views, sympathetic to the Pharisees. In contrast to this, Alexander Jannaeus had supported the Saducees.

Hyrcanus had scarcely reigned three months when his younger brother Aristobulus II, who agreed with his father's Sadducean stance, rose in rebellion. Hyrcanus advanced against him at the head of his mercenaries and his followers. The brothers met in battle near Jericho and many of Hyrcanus' soldiers went over to Aristobulus II, and thereby gave the latter the victory.

Hyrcanus took refuge in the citadel of Jerusalem; but the capture of the Temple by Aristobulus II compelled Hyrcanus to surrender. A peace was then concluded, according to the terms of which Hyrcanus was to renounce the throne and the office of high priest, but was to enjoy the revenues of the latter office.Schürer, "Gesch." i. 291, note 2

Alliance with the Nabataeans

This agreement however did not last, as Hyrcanus feared that Aristobulus was planning his...
Read More