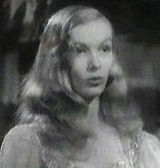 I Married A Witch

I Married a Witch

Description:
I Married a Witch is a 1942 fantasy romantic comedy film, directed by René Clair, and starring Veronica Lake as a witch whose plan for revenge goes comically awry, with Fredric March as her foil. The film also features Robert Benchley, Susan Hayward and Cecil Kellaway. The screenplay by Robert Pirosh and Marc Connelly and uncredited other writers, including Dalton Trumbo, is based on the novel The Passionate Witch by Thorne Smith, who died before he could finish it; it was completed by Norman H. Matson and published in 1941.

Two witches in colonial Salem, Jennifer (Veronica Lake) and her father Daniel (Cecil Kellaway), are burned at the stake after being denounced by Puritan Jonathan Wooley (Fredric March) and their ashes buried beneath a tree to imprison their evil spirits. In revenge, Jennifer curses Wooley and all his male descendants - they are doomed to always marry the wrong person.

Centuries pass. Unfortunate Wooley males - each played by March - are shown marrying shrewish women, generation after generation. Finally, in 1942, lightning splits the tree, freeing the spirits of Jennifer and Daniel. They discover Wallace Wooley (March again), living nearby and running for governor, on the eve of marrying the ambitious Estelle Masterson (Susan Hayward), whose father (Robert Warwick) just happens to be Wooley's chief political backer.