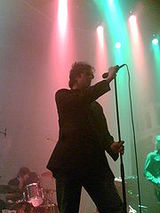 Description:
Ian Stephen McCulloch (born 5 May 1959) is an English singer, born in Liverpool, and is best known as the frontman for the rock group Echo & the Bunnymen."". Allmusic. Retrieved 1 June 2010.

McCulloch was a singer-songwriter with the Crucial Three, one of many local bands that sprung up amongst the regulars who patronized a Liverpool club called Eric's in the late seventies. The other two members were Julian Cope, later of The Teardrop Explodes, and Pete Wylie who went on to form Wah!

In 1978 McCulloch founded Echo & the Bunnymen with Will Sergeant (guitar), Les Pattinson (bass), and a drum machine (allegedly named Echo), making their live debut at Eric's later that year. In 1979 the Bunnymen exchanged the drum machine for Pete de Freitas on drums. With their line up solidified, the Bunnymen enjoyed critical acclaim in the late seventies and early eighties culminating with the release of Ocean Rain in 1984. In the late 1980s, McCulloch left to pursue a solo career under the impression the Bunnymen would be laid to rest if only temporarily. When the remaining Bunnymen continued using the name with new singer Noel Burke, the split became permanent with McCulloch referring to the band as "Echo & the Bogusmen".

In 1990 McCulloch achieved modest chart success with the album Candleland which reflected a more mature outlook on the world, owing to the recent deaths of McCulloch's father and Pete de Freitas. It yielded two...
Read More