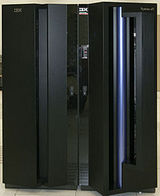 Description:
<!-- Deleted image removed: --><!-- Unsourced image removed: -->IBM System z9 is a line of IBM mainframe. It was announced on July 25, 2005 and the first models were available on September 16, 2005. The System z9 also marks the end of the previously used eServer zSeries naming convention, and it is the last z/Architecture 1 (ARCHLVL 2) machine.

There are several functional enhancements in the System z9 compared to its zSeries predecessors. Some of the differences include:

The Support Element is the most direct and lowest level way to access a mainframe. It circumvents even the Hardware Management Console and the operating system running on the mainframe. The HMC is a PC...
Read More