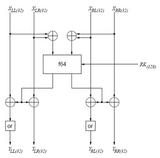 Description:
In cryptography, the IDEA NXT algorithm (previously known as FOX) is a block cipher designed by Pascal Junod and Serge Vaudenay of EPFL (Lausanne, Switzerland). It was conceived between 2001 and 2003, the project was originally named FOX and was published in 2003. In May 2005 it was announced by MediaCrypt under the name IDEA NXT. IDEA NXT is the successor of the IDEA algorithm and it uses an extended Lai-Massey scheme known for its robustness to cryptanalysis. It was mandated by MediaCrypt, a Swiss company owner of the distribution rights on IDEA and the patents of IDEA NXT. The IDEA NXT cipher is a family of different sub-ciphers with various blocks and keys size : Standard NXT64 (block of 64 bits, key of 128 bits, 16 rounds) and Standard NXT128 (block of 128 bits, key of 256 bits, 16 rounds). Variations of the Standard versions can be built (key of 0-256 bits, round numbers from 2-255). Also individual tables (sbox, permutation matrix) can be loaded, replacing the Standard table.

The fact that IDEA NXT is patented and requires a license may influence the extent of its adoption, particularly given that there are viable alternatives (eg AES, Serpent and the Twofish algorithm) in the public domain which have no restrictions on them whatsoever.