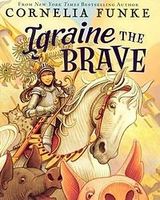 Description:
Igraine the Brave is a fantasy novel written by Cornelia Funke. It was released on October 1, 2007, published by the Chicken House. Originally written in German, it was translated by Anthea Bell.

Igraine lives in an old castle with her family, magicians who possess powerful books of magic. Her older brother Albert is following in the family line, but Igraine plans to be a knight one day, even though she feels there is not much adventure to be had at home these days. Her ancestors, though, had warded off many attempts to steal the books of magic.

On her 12th birthday, Igraine's parents give her a magical suit of armor, but in the process, they are turned into pigs by mistake. Matters get worse when the next-door Baroness's castle is taken over by Osmond the Greedy, who wants to take the magical books so he can overthrow the king. Igraine and her brother must find a way to defend the castle from Osmond's siege while keeping their parents' condition secret and searching for the missing ingredient for their restoration to human form. Albert handles the castle's magical defenses while Igraine leaves to find the missing ingredient. She finds the ingredient and some assistance, in the form of the Sorrowful Knight of the Mount of Tears, who not only agrees to help her return home but also begins teaching her about the rules of chivalry, and eventually helps Igraine and her family end the siege.

Igraine- An 11 year old girl that wants to be a knight...
Read More