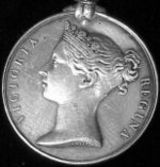 Description:
The Indian Mutiny Medal was a campaign medal approved in 1858, for issue to officers and men of British and Indian units who served in operations in suppression of the Indian Mutiny.

The medal was initially sanctioned for award to those troops who had been engaged in action against the mutineers. However in 1868 the award was extended to all those who had borne arms or who had been under fire,John Sly. "Battle Stars". Ancestors, issue 57, May 2007, pp36-43.

The obverse of the medal depicts the head of a young Queen Victoria and bears the inscription Victoria Regina. The reverse shows a helmeted Britannia holding a wreath in her right hand and a union shield on her left arm. She is standing in front of a lion. The words "India 1857-1858" are inscribed on the reverse of the medal. The ribbon is white with two scarlet stripes.

Five clasps were authorised, though the maximum awarded to any one man was four.Medal Yearbook 2004, p137 The medal was issued without a clasp to those who served but were not...
Read More