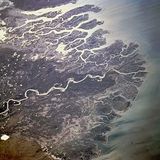 Description:
The Indus River Delta (), forms where the Indus River flows into the Arabian Sea in Pakistan. The delta covers an area of about 16,000 square miles (41,440 km²), and is approximately 130 miles across where it meets the sea. Unlike many other deltas, the Indus River Delta consists of clay and other infertile soils, and is very swampy. The delta receives between 10 and 20 inches of rainfall in a normal year.

Pakistan's fifth largest city, Hyderabad, lies about 130 miles north of the mouths of the Indus. Towns are found throughout the delta, but there are no large cities on the delta south of Hyderabad. Karachi, Pakistan's largest city, lies west of the delta on the coast of the Arabian Sea.

Average temperatures for the delta region in July range from 70 - 85 °F, and 50 - 70 °F in January. The Indus River Delta is an important region for migrating water birds, and is an area rich in freshwater fauna. Fish found in the delta include the Hilsa, Indus baril, Indus garua (a catfish), the giant snakehead, golden mahaseer and the Rita catfish.

Indus Delta was designated a Ramsar site on November 5, 2002.