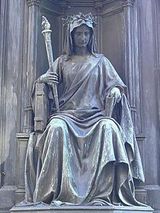 Description:
The Intercollegiate Studies Institute, Inc., or (ISI), is a non-profit educational organization founded in 1953 as the Intercollegiate Society of Individualists. Its members, over 50,000 college students and faculty across the United States, use programs intended to supplement a collegiate education and provide access to resources that help achieve an education based primarily on works of influential men and women in the European and Christian traditions. The group supports "limited government, free market economy, and Judeo-Christian moral traditions".

ISI's flagship journal, The Intercollegiate Review, is sent to students and teachers free of charge. ISI also publishes two other scholarly journals, the quarterly Modern Age, and the annual The Political Science Reviewer, as well as a web journal, First Principles.

Although ISI does not have any official partisan or religious affiliation, the Institute tends towards paleoconservative and traditionalist conservative positions. The influence of several important twentieth-century Roman Catholic thinkers is also apparent at ISI. In fact, the very reason given for the existence of ISI is that education in the modern university is insufficiently liberal (in the traditional sense) to meet the needs of a classical education. Further, the organization fights what it perceives as political correctness and liberal (in the modern sense) bias among campus...
Read More