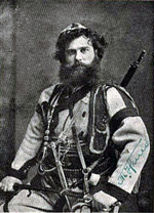 Description:
The Internal Thracian Revolutionary Organisation (bulg. Вътрешна тракийска революционна организация), ITRO, was a Bulgarian revolutionary organisation active in Western Thrace and southern Bulgaria between 1922 and 1934.The reason for the establishment of ITRO was the deplorable situation of the Thracian Bulgarians in Western Thrace after the transfer of the region from Bulgaria to Greece in May, 1920. After the catastrophic defeat suffered by the Greek army in Anatolia in 1922, a stream of Greek refugees poured into Greece and settled, for the most part, in Aegean Macedonia and Western Thrace. In order to provide housing for the refugees, the Greek government interned tens of thousands of Bulgarians from Western Thrace on the Aegean Sea islands. These returned to their homes after an intervention of the League of Nations, only to find them occupied by Greek refugees from Asia Minor.

The desperate situation forced the Bulgarians to resort to armed struggle. ITRO was formed with the help of IMRO under the leadership of Tane Nikolov - former IMORO's band leader and its detachments started to launch attacks on the Greek garrisons in the region. The organisation acted in co-operation with the representatives of the Muslims (Turks) in Western Thrace raising the slogan for the establishment of “independent Thrace” under the supervision of the League of Nations and "Thrace for the Thracians".At the end of 1922, the Greek...
Read More