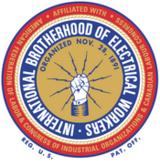 Description:
<!-- Include all unused fields for future use. See Infobox Union for usage. -->The International Brotherhood of Electrical Workers (IBEW) is a labor union which represents workers in the electrical industry in the United States, Canada, Panama and several Caribbean island nations; particularly electricians, or Inside Wiremen, in the construction industry and linemen and other employees of public utilities. The union also represents some workers in the computer, telecommunications, broadcasting, and other fields related to electrical work. It was founded in 1891 shortly after homes and businesses in the United States began receiving electricity. Its international president is Ed Hill. The IBEW is affiliated with the AFL-CIO.

The beginnings of the IBEW were in the Electrical Wiremen and Linemen's Union No. 5221, founded in St. Louis, Missouri in 1890. By 1891, after sufficient interest was shown in a national union, a convention was held on November 21, 1891 in St. Louis. At the convention, the IBEW, then known as the National Brotherhood of Electrical Workers (NBEW), was officially formed. The American Federation of Labor gave the NBEW a charter as an AFL affiliate on December 7, 1891. The union's official journal, The Electrical Worker, was first published on January 15, 1893, and has been published ever since. At the 1899 convention in Pittsburgh, Pennsylvania, the union's name was officially changed to the International Brotherhood of Electrical Workers.