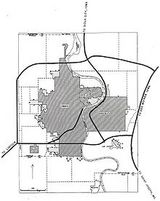 Description:
Interstate 680 (abbreviated I-680) in Nebraska and Iowa is the northern bypass freeway for the Omaha, Nebraska-Council Bluffs, Iowa metropolitan area. I-680 spans from its western terminus in western Omaha to its eastern terminus near Neola, Iowa. For a stretch, I-680 is co-signed with Interstate 29. Until 1973, the section in Iowa between the current eastern terminus and I-29 was designated as Interstate 80N. I-680 in Omaha was originally designated Interstate 280. Maps from the early and mid-1960s showed I-280 in Omaha. Since this highway would extend into Iowa, and I-280 was already planned for the Quad Cities area, this route was redesignated I-680.

At Nebraska Highway 133, I-680 turns to the east towards Iowa. South this interchange, I-680 traveled through residential neighborhoods, but to the east, the population thins and the interstate...
Read More