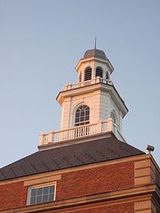 Iowa City High School is a public high school in Iowa City, Iowa. It was built in 1937 as part of the Public Works Projects started by President Franklin D. Roosevelt to provide jobs. The first classes were held in the fall of 1939.The first high school building was converted to a junior high school after the new building opened. It was located where Mercy Medical Plaza now stands. The new building sits atop a hill on the east side of Iowa City and, at one time, the tip of the bell tower was said to be the tallest point in Iowa City.The school motto is "The School that Leads."

City High School was built through the Public Works Projects, one of many other programs formed in Franklin D. Roosevelt's New Deal package. City High would become the second high school to be built in Iowa City, as the older one was becoming overcrowded as the population of the city increased. To determine the new location of the school, Iowa City residents had to vote whether to build the school in a central location, closer to the existing high school, or in a Morningside location, which was the name of the street which it would be built by, out of town on the city's east side. The Morningside location was favored, and the school was built on top of a large hill outside of town. Over time, the city's suburban expansion reached the school, enclosed it, and the...
Read More