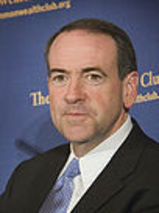 Prior to the 2008 caucuses, as in previous election cycles with a competitive presidential race, an unofficial Ames Straw Poll was held, on August 11, 2007. The official one, electing delegates to the state convention, was held on January 3, 2008, the same day as the Democratic contest. In the Ames Straw Poll, Mitt Romney finished first with 32% of the vote. In the January 2008 caucuses, Mike Huckabee finished first with 34% of the vote.

Unlike the Democratic caucus, the Republican Party does not use voting rounds or have minimum requirements for a percent of votes. The Republican version is done with a straw vote of those attending the caucus. This vote is sometimes done by a show of hands or by dividing themselves into groups according to candidate. However, officially it is done with voters receiving a blank piece of paper with no names on it, and the voter writing a name and placing it in a ballot box.

Following the straw poll, delegates are then elected from the remaining participants in the room, as most voters leave once their vote is cast. All delegates are officially considered...
Read More