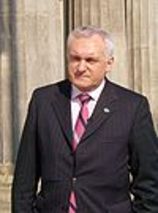 Description:
The Irish general election of 2007 took place on 24 May 2007 after the dissolution of the 29th Dáil by the President on 30 April 2007, at the request of the Taoiseach. The electorate was given the task of choosing the members of the 30th Dáil who met on 14 June 2007 to nominate a Taoiseach and ratify the ministers of the Government of the 30th Dáil. While Fine Gael gained 20 seats, Fianna Fáil remained the largest party. The election was considered a success for Fianna Fáil; however, Fianna Fáil's junior coalition partners in the 29th Dáil, the Progressive Democrats, lost six of their eight seats.

On 12 June 2007, Fianna Fáil and the Green Party reached agreement on a draft Programme for Government, this was subsequently ratified by the Fianna Fáil parliamentary party and Green Party members on 13 June 2007. This resulted in the formation of a coalition government on 14 June 2007 between Fianna Fáil, the Green Party and the Progressive Democrats. The government was initially supported by four Independent TD.

On 29 April 2007, President Mary McAleese dissolved the 29th Dáil on the request of the Taoiseach, Bertie Ahern. The election date was officially set as 24 May 2007; the 30th Dáil would convene on 14 June 2007 at which stage the Taoiseach would be nominated and the rest of the Government approved for appointment by the President. Official campaigning began as soon as the announcement had been made.