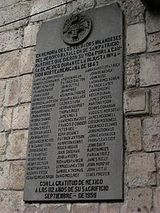 Description:
The Irish military diaspora refers to the many people of either Irish birth or extraction (see Irish diaspora) who have served in foreign military forces, regardless of rank, duration of service, or success.

A significant number of Irish people, of both the Roman Catholic and Protestant Christian denominations, and their descendants, have served in the forces of the British Crown over the centuries (by the end of the 18th century and the beginning of the 19th century, well over one-half of the British military forces consisted of Irish men), because of:-