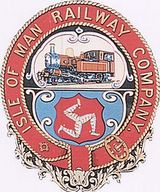 Description:
The Isle of Man Railway (IMR) is a narrow gauge steam-operated railway connecting Douglas with Castletown and Port Erin in the Isle of Man, and branded as the Isle of Man Steam Railway. The line is built to gauge and is long. It is part of what was a much larger network that once served the westerly town of Peel, the northern town of Ramsey and the small mining village of Foxdale and at one time the lines covered in excess of which was a considerable amount on an island as small as the Isle of Man. Despite now being in government ownership, it still uses the original historic rolling stock and locomotives and there are few concessions to modernity.

The line from Douglas to Port Erin is the last remaining part of the former system owned by the Isle of Man Railway Company, formed in 1870. Its first line, from Douglas to Peel, was opened on 1 July 1873, and was followed by the Port Erin line on 1 August 1874. Initially the Port Erin line had been planned to terminate at Castletown however the construction of deep water docking facilities at Port Erin caused an extension to the line - a few years after completion, the dock was destroyed by heavy seas and the idea of deep water vessels abandoned there. A third line was built in 1878-1879 by a separate company, the Manx Northern Railway which ran from St John's to Ramsey. A further short line was constructed from St John's to Foxdale in 1885 to serve the lead mines there. Although it was built by the...
Read More