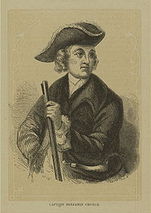 Description:
The Isthmus of Chignecto is an isthmus bordering the Maritime provinces of New Brunswick and Nova Scotia which connects the Nova Scotia peninsula with North America.

The isthmus separates the waters of Chignecto Bay, a sub-basin of the Bay of Fundy, from those of Baie Verte, a sub-basin of the Northumberland Strait which is an arm of the Gulf of St. Lawrence. The isthmus stretches from its northerly point at an area in the Petitcodiac River valley near the city of Dieppe, New Brunswick to its southerly point at an area near the town of Amherst, Nova Scotia. At its narrowest point between Amherst and Tidnish, the isthmus measures 24 kilometres wide. Because of its strategic position, it has been important to competing forces through much of its history of occupation.

The majority of the lands comprising the isthmus have low elevation above sea level; a large portion comprises the Tantramar Marshes, as well as tidal rivers, mud flats, inland freshwater marshes, coastal saltwater marshes, and mixed forest. Several prominent ridges rise above the surrounding low land and marshes along the Bay of Fundy shore, namely the Fort Lawrence Ridge (in Nova Scotia), the Aulac Ridge, the Sackville Ridge, and the Memramcook Ridge (in New Brunswick).

In contrast to the Bay of Fundy shoreline in the west, the Northumberland Strait shoreline in the east is largely forested with serpentine tidal estuaries such as the Tidnish River penetrating inland. The narrowest point on the...
Read More