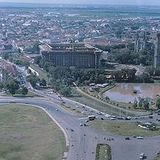 After the Indonesian National Revolution 1945-1949, followed by the acknowledgement of the independence Indonesia from The Netherlands in 1949, there was a growing idea to build a national mosque for this new republic, befitting for a country with the largest Muslim population in the world. The idea of constructing a grand Indonesian national mosque was launched by KH. Wahid Hasyim, Indonesia's first minister for religions affairs,and Anwar Cokroaminoto, later appointed as the chairman of the Masjid Istiqlal Foundation. The committee for the construction of the Istiqlal Mosque, led by Anwar Cokroaminoto, was founded in 1953. Anwar proposed the idea of a national mosque to Indonesian President Sukarno, who welcomed the idea and later helped to supervise the construction of the mosque. In 1954, the committee appointed Sukarno technical chief supervisor.

Sukarno actively followed the planning and construction of the mosque, including acting as the chairman of the jury for the mosque...
Read More