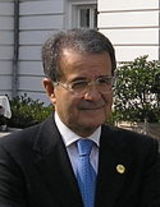 Description:
In the Italian general election, 2006 for the renewal of the two Chambers of the Parliament of Italy held on April 9 and April 10, 2006 the incumbent prime minister Silvio Berlusconi, leader of the center-right House of Freedoms, was narrowly defeated by Romano Prodi, leader of the center-left The Union.

Initial exit polls suggested a victory for Prodi, but the results narrowed as the count progressed. On April 11, Prodi declared victory;, BBC News Berlusconi never conceded defeat explicitly but this is not required by the Italian law.

Preliminary results showed The Union leading the House of Freedoms in the Chamber of Deputies, with 340 seats to 277, thanks to obtaining a majority bonus (actual votes were distributed 49.81% to 49.74%). One more seat is allied with the Union (Valle d'Aosta) and 7 more seats in the foreign constituency. The House of Freedoms had secured a slight majority of Senate seats elected within Italy (155 seats to 154), but The Union won 4 of the 6 seats allocated to voters outside Italy, giving them control of both chambers. On April 19, Italy's court of last resort (Corte di Cassazione) ruled that Prodi had indeed won the election, winning control of the Chamber of Deputies by only 24,755 votes out of more than 38 million votes cast, and winning 158 seats in the Senate to 156 for Berlusconi's coalition. Even so, Berlusconi refused to concede defeat, claiming unproven fraud.

Recent developments, including publishing of a...
Read More