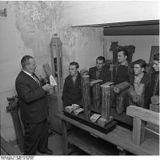 Description:
Italians in Germany consist of ethnic Italian migrants to Germany and their descendants, both those originating from Italy as well as from among the communities of Italians in Switzerland . Over time most Italians moved from home to Germany for reasons of work. Some also left for personal relations, study, or political reasons. Today, Italians in Germany form one of the largest Italian diasporas in the world and account one of the largest immigrant groups in Germany.

Large numbers of Italians have resided in Germany since the early Middle Ages, particularly architects, craftsmen and traders. During the late Middle Ages and early modern times many Italians came to Germany for business, and relations between the two countries prospered. The political borders were also somewhat intertwined under the German princes' attempts to extend control over all the Holy Roman Empire, which extended from northern Germany down to southern Italy. During the Renaissance many Italian bankers, architects and artists moved to Germany and successfully integrated in the German society.

When the huge Italian emigration of the 19th century began, only a few Italians moved to the German Empire under Prussian rule.

With Germany's post-World War II economic boom (Wirtschaftswunder), a large wave of immigrants from Italy relocated to Germany. Italy and Germany have been joint members of the European Coal and Steel Community (later the European Economic Community). Since the establishment of......
Read More