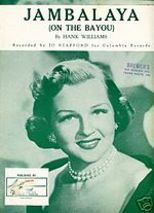 Jambalaya (On The Bayou)

Jambalaya (On the Bayou)

Description:
"Jambalaya (On the Bayou)" is the title of a song written and recorded American country music singer Hank Williams that was first released in July 1952. Named for a Creole and Cajun dish, jambalaya, it spawned numerous cover versions and has since achieved popularity in a number of music genres.

With a melody based on the Cajun song "Grand Texas", some sources, including Allmusic, claim that the song was co-written by Williams and Moon Mullican, with Mullican uncredited but receiving ongoing royalties.

Released in July 1952, crediting Williams as the sole author, it was performed by Williams as a country song. It reached number one on the U.S. country charts for fourteen non-consecutive weeks. "Jambalaya" remains one of Hank Williams most popular songs today.

Cajun Roots of the Song

Since the original melody of the song was from a Cajun French song called "Grand Texas", the song is a staple of cajun culture.Although Williams changed the lyrics, he kept a Louisiana theme. In addition, Cajuns readily identified with the soulful sound of Williams. After Williams released his version, Cajuns recorded the song again using Cajun instruments. However, this time they used Williams' lyrics translated into the Cajun French language. Over the past few decades, the Cajun French version has been performed by many Cajun bands including Aldus Roger and Jo-El Sonnier.