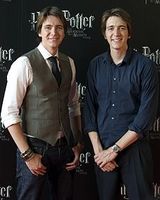 James and Oliver were born in the Sutton Coldfield area of Birmingham, West Midlands county, England on 25 February, 1986. They are the only sons of Susan (née Spare) and Martyn Phelps. Oliver is the older of the two, by 13 minutes. Growing up, they attended Little Sutton Primary School and The Arthur Terry Secondary School. They left school in 2004, having taken their A-level exams.

They are known by friends, family and film crew to be pranksters, from something as innocent like changing their names around, to the rumored prank that caused the filming to be redone. Even though they did admit to changing their characters around, it was not done while filming, it was done once while in rehearsal. They claimed the rumor about changing during filming was made up in a recent interview by moviesireland.

Both James and Oliver showed an interest in acting at an early age, having performed side by side in a few school drama productions when they were younger. In 2000, when they were 14 years old, the twins were cast as Fred and George Weasley in the film Harry Potter and the Philosopher's Stone.

James and Oliver's best friends in the Harry Potter cast are Rupert Grint and Matthew Lewis. Outside of acting, James has worked as a runner on the...
Read More