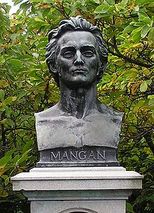 Mangan was the son of a former hedge school teacher who took over a grocery business and eventually became bankrupt.

Born in Dublin, he was educated at a Jesuit school where he learned the rudiments of Latin, Spanish, French, and Italian. He attended three different schools until the age of fifteen. Obliged to find a job in order to support his family, he became a lawyer's clerk, and was later an employee of the Ordnance Survey and an assistant in the Library of Trinity College, Dublin.

Although his early poetry was often apolitical, after the Great Famine he began writing poems with a strong nationalist bent, including influential works such as My Dark Rosaleen or Róisín Dubh and A Vision of Connaught in the Thirteenth Century.Mangan was a lonely and difficult man who suffered from mood swings, depression and...
Read More